After whirlwind 16-month stretch, Canadian basketball player Kayla Alexander gets back to basics 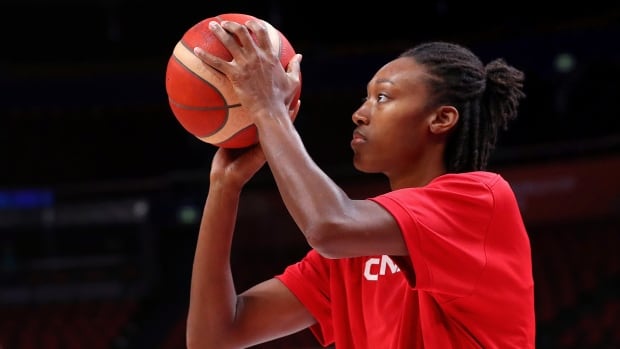 The Canadian basketball player was on the team that failed to advance past the group stage at the Tokyo Olympics. She then moved back to her professional club, a return to consistent, high-level basketball after the pandemic marred previous seasons.

One problem — her team was located in Russia, and Alexander was forced to return home in February after Russian troops invaded Ukraine. The whirlwind ended in Australia in September, where the Canadian women played for bronze at the World Cup, ultimately finishing fourth.

The 31-year-old from Milton, Ont., is settled into France’s top league, long a hotbed for Canadian talent, where she suits up for Tango Bourges Basket. She’s two years removed from the launch of her clothing business, Tall Size, which she’s now looking to expand. Recently, Alexander spent a week in Toronto for a relatively low-stakes Canada Basketball training camp.

“This [was] kind of like a nice little breather to take a step away from our pro teams, come in to the Canada Basketball environment, not need a translator, getting back to the basics,” Alexander said in a recent interview with CBC Sports.

Canadian star Kayla Alexander growing inside and outside of basketball

Between playing basketball and being a businesswoman, Alexander is balancing the two to become a force on and off the court.

Alexander may have an increased appreciation of home and its familiarity now after her difficult exit from Russia. She fled just days before Brittney Griner was arrested at a Moscow airport in February.

“It’s weird because I’m sure from your end of the world all you guys were seeing was the madness that was going on in the Ukraine. But in Russia, life went on as normal. You would never know that there was a war taking place aside from people talking about it,” she said.

The urgency to leave came gradually. Alexander was comfortable in Russia, where she was facing top competition, receiving solid pay and developing her game.

But soon, there was bulletin from the WNBA advising its players to flee. Then, Canada Basketball followed suit. Alexander’s parents reached out too.

“Finally the flights were disappearing. It was getting harder and harder to find flights out of Russia. I don’t want to be stranded here. So that’s when I decided to make the decision to leave,” Alexander said.

Alexander’s team, Dynamo Novosibirsk — located in the middle of Siberia, told her that leaving meant breaking her contract. As such, it wouldn’t pay airfares as usual.

“[We] helped her with finding flights as we had access through our travel agent to more available options than what was available for someone just looking online,” Dignard recalled in an email to CBC Sports.

“Time was of the essence.”

Eventually, Dignard and Alexander charted a path home — from Novosibirsk to Moscow to the Phillipines and, finally, Toronto.

“When I landed on Canadian soil I was happy to be home,” Alexander said.

Griner, the two-time American Olympian and gold medallist, remains in Russia following her arrest for carrying vape cartridges and hash oil through the Moscow airport. She was recently transferred to a penal colony in Siberia.

“I can’t even begin to imagine what she’s going through right now. It’s terrifying. Honestly, I’m just praying that she gets to come home safe and sound sooner than later,” Alexander said.

Alexander moved on to Lyon in the French league for the remainder of the season before joining Bourges.

In between, she donned the Canadian jersey at a major tournament for the first time since Tokyo 2020, where Canada failed to reach the knockout stage despite being ranked fourth and entering with medal hopes.

Alexander shone at the World Cup in the fall, averaging double-digit points and rebounds per game in the group stage before running out of gas amid a stretch of eight contests in 10 days.

Canada fell to the U.S. in the semifinals before dropping the bronze-medal showdown to the host Australians. Neither game was close.

“It still stinks because I honestly felt like we had what it took to get on that podium,” Alexander said. “But yeah, I just ran out of steam for the last couple of games. But yes, I’m really proud of our team, what we accomplished.”

Breanna Stewart led the way for the United States with 17 points in 20 minutes to beat Canada 83-43 in the FIBA Women’s Basketball World Cup semifinals.

The opportunity to reach the podium was Canada’s first at either the World Cup or Olympics, on either the men’s or women’s side, since 1986.

It was also Canada’s first major tournament under the helm of head coach Victor LaPeña, who took over from Lisa Thomaidis after the Olympics.

“I love the direction Victor’s taking the team, the style of play he wants us to play with, that speed, defensive-minded — which I think is always been a characteristic of Canada Basketball,” Alexander said.

Canada’s next opportunity for tournament action is the regional FIBA AmeriCup in July, where the goal will be another meeting with the Americans with a medal on the line.

“[It sucked] losing by that much. But at the same time it’s like, ‘OK, what can we learn from this? What can we take away? What are they doing that we can try and implement in our game?'”

For now, the six-foot-four Alexander is busy with Tall Size, an online clothing directory for tall women that launched in March 2021. Alexander’s next goals are to raise more capital and create a pair of popups in New York and Los Angeles.

Alexander and business partner Nicole Murphy, a longtime friend and fellow tall person, hatched the idea during a phone call in which Murphy lamented the exposed parts of her body during winter because no clothes were long enough for her.

Now, they have 25 brand partners and a goal of making tall women more comfortable in their bodies.

“I just love it because we’re making life easier for tall women and it’s so much bigger than the clothes,” Alexander said.