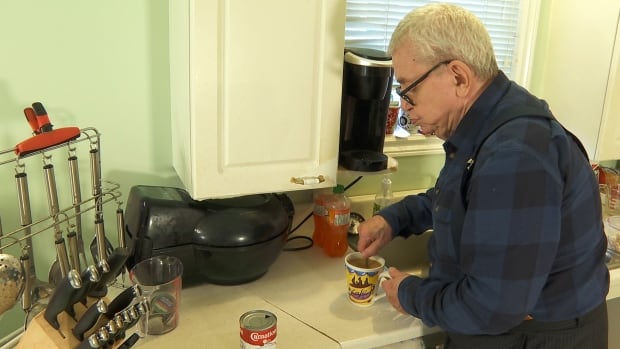 CBC’s series Concerning Care takes a closer look at home and respite care in Newfoundland and Labrador, which has Canada’s oldest population. It focuses on a shortage of workers, the emotional and financial toll of loved ones providing care to family members, and issues that home-care workers themselves face.

Cecil Whitten is making a cup of coffee in the accessible St. John’s home that was custom-built to fit his and his wife’s physical needs.

Whitten, 74, has cerebral palsy and gets around with the help of a walker and a scooter. His wife of 20 years, Tina, has spina bifida.

Even though she currently isn’t mobile, says Whitten, they are “very fortunate” to still manage well in their own home.

“We just live our lives the same as anybody else,” he said.

Still, there is a looming concern Whitten can’t ignore — one he grows more worried about every day.

If — or when — Whitten and his wife need to go into a long-term care facility, he believes they would need different levels of care, which means they would likely be separated.

It’s a thought Whitten can’t bear — they do everything together.

“We have a unique relationship. We are not just two separate people. We’re actually two souls together,” he said, the love for his wife showing in his eyes.

“To separate two people at a point in their life when they’re most vulnerable, it is unconscionable to me that it could be done and there should be a solution found.”

Placed together only if separation would be ‘detrimental’

“The rest of the time … we can basically take care of ourselves,” Whitten said, adding that he has been cooking for the family since he was a “young fella” and is still doing it.

A separation is still hypothetical. But Whitten’s concerns are warranted.

In a statement to CBC News, the provincial Health Department said that, in some cases, couples with differing care needs are placed together if “it has been determined that separation is detrimental to a spouse.”

Watch the video below to meet Cecil Whitten and hear his story:

After 24 years together, disabled couple worry they’ll be separated in long-term care

Cecil and Tina Whitten know they’ll eventually have to leave their accessible home for a long-term care facility. But with one partner requiring more care than the other, they worry they’ll be separated once they make the move.

But it adds, “at this time, the regional health authorities could only consider this process when no other person with higher care needs is waiting for long-term care placement in that particular home. In most cases, there is a wait-list.”

Joint placement is possible in personal-care homes, however, reads the statement, as “there is greater capacity.”

Provincially, 414 people were on wait lists for long-term care facilities as of Sept. 22, with 188 alone in the Eastern Health region, where the Whittens live.

Only 157 people provincewide are waiting for a bed in a personal-care home, of which 43 are in Eastern Health.

Son details the heartbreaking journey of his parents

While Whitten and his wife only fear what might lie ahead, a family close by has gone through their dreaded scenario.

Standing in front of St. John’s long-term care facility Pleasant View Towers, where his mother now lives, Gavin Will of Portugal Cove-St. Philip’s thinks back to the impact of his parents’ separation.

“It was very distressing, very hard on the family,” he said.

Ray Will, diagnosed with Parkinson’s disease, and Delia Will, who has dementia, lived together in a personal care home until February, when Ray lost his mobility and had to move to a long-term care facility.

“Once my father moved out, there was a definite decline in both of them,” said Will.

His mother didn’t understand what was happening, said Will, and questioned whether her husband had died.

“[My father] just felt so frustrated.… There was nothing he could do about it. And it must have been so infuriating to be so helpless,” said Will.

“It was heartbreaking to watch.”

Will started a petition for a legislation change and watched from the public galleries when it was presented in the House of Assembly.

“[John Haggie] was engaged in some conversation with another cabinet minister to his side. The Tories on the other end, I don’t know, I think they thought it was recess time,” said Will.

“I thought to myself, ‘This is what people really think about seniors’ care, those who are in power.’ And it made me so angry to see that this is the cold, hard reality.”

In early October, Ray died, one day after his and Delia’s 63rd wedding anniversary.

She wasn’t by his side.

While it’s too late for his own parents, Will is still calling for a legislation change.

“All it takes is commitment. All it takes is a decision that you believe that this is an important issue and you’re gonna do something about it,” said Will. “This is actually something that can be done.”

How one Atlantic province made the change

In Nova Scotia, it has been done.

The Life Partners in Long-Term Care Act, which came into effect on March 1, 2021, allows couples to be placed together, according to the highest level of care needed by one of the partners.

If one moves into a care facility first, the other has priority to be placed in the same home once they require care.

Nova Scotia Liberal Party Leader Zach Churchill, who was health minister when the act took effect, says it has changed many people’s lives.

“You can imagine how traumatic it would be to separate people that have been together for decades,” said Churchill.

“For us to … ensure that couples, at the time when they probably needed each other the most, could spend the rest of their lives together, it was really, I think, moving for a lot of people.”

Since all three parties agreed on the legislation change, said Churchill, it only required a law to be passed and the logistics of the change to be worked out, such as reuniting couples and solving room availability issues.

Noting the legislation’s “incredible impact” on people’s life expectancy and health, Churchill hopes it will spread to other provinces.

“Whatever the logistical or operation or budgetary challenges that present themselves, it is the right thing to do for people. It’s the compassionate thing to do,” said Churchill. “We all know that if it was us, we want to stay with our partners.”

“My parents are both senior citizens and, at some point, may have to avail of long-term care. I would not want to see them, having been married for more than 60 years, be separated.”

While that’s a change in tone from the previous health minister, it’s unclear specifically what has changed since John Haggie said it was not possible for this province.

“We don’t have enough beds to match the demand,” he told CBC in March. “I think it would be very difficult to legislate something we couldn’t deliver.”

The Health Department, said Osborne, is looking at both the Nova Scotia model and the provincial models of personal and long-term care to determine whether a legislation change is possible.

Too late for Ray and Delia Will — but hopefully not for Cecil and Tina Whitten.

They, and anyone fearing a separation from their partner, said Gavin Will, need to put pressure on provincial decision-makers.

“Tell them that this is an important issue. That this is a human rights issue,” said Will.

“These are people we’re talking about. These are members of the community who have contributed to our society. It’s time to tell them that we count.”

Concerning Care tells the stories of the people introduced here, along with others, on various platforms — including on Here & Now, CBC N.L.’s website and on the radio.