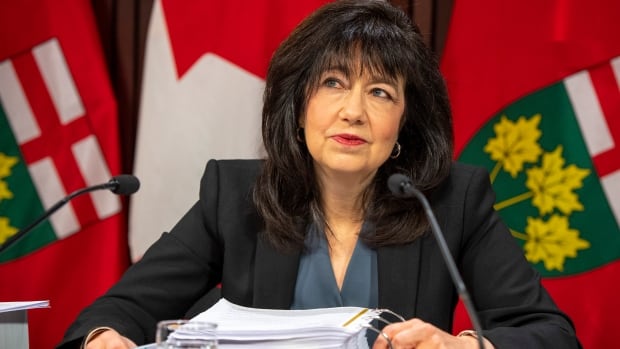 Ontario’s auditor general says the province wasted 38 per cent of COVID-19 vaccine doses between February and June because it overestimated demand for boosters, and her annual report also identifies that the province is running a disorganized booking system and doesn’t fully track adult vaccinations.

Auditor general Bonnie Lysyk says in her report today that overall COVID-19 vaccine wastage in the province is nine per cent, or 3.4 million doses.

She says about half of that could have been avoided with better forecasting of demand.

Lysyk is discussing her findings at Queen’s Park. You can watch the news conference live in the player above.

Lysyk says wastage rates varied quite a bit between public health units, and one private company wasted 57 per cent of its supply between May 2021 and May 2022, but the province hasn’t determined the causes.

She also identified problems with the system for booking vaccination appointments, as the province created its own portal but about half of public health units are using their own, while some hospitals, pharmacies and private companies are using their own methods as well.

“Multiple booking systems also encouraged Ontarians to ‘vaccine shop’ by registering for multiple appointments to try to get either the quickest appointment or a specific vaccine brand,” Lysyk wrote in the report.

“The continued absence of a centralized booking system (as of August 2022) increases the likelihood of unnecessary wastage continuing into the future since such no-show appointments can result in more wasted doses of vaccine.”

Multiple bookings led to about 227,000 no-shows in 2021 in the provincial booking system alone, the auditor found, which likely contributed to vaccine wastage.

The lack of a centralized booking system also led to inconsistent controls and checks to ensure that when bookings were opened up to particular groups, such as health-care workers or immunocompromised people, only those eligible were actually making appointments, Lysyk found.

Family doctors were underutilized in the vaccine rollout, Lysyk found, noting that the compensation structure provided a disincentive for them to administer shots in their own offices.

The Ministry of Health conducted a study of procedures and effectiveness at nine mass immunization clinics between the summer of 2021 and December of that year and finalized the study this July, Lysyk wrote, but did not share results with public health units to help them plan for the rollout of the bivalent vaccines this fall.

As well, the auditor says that despite the Ministry of Health saying in 2014 that it was going to expand a system used for tracking student vaccinations to keep vaccine records for all Ontarians, that has not happened.

Lysyk found that contracts for goods and services related to COVID-19 were timely given the urgency of the pandemic, but better co-ordination could have reduced some costs.

About $18.7 million was paid to private companies for underutilized mobile COVID-19 testing, the auditor found.

“Vendors were paid a guaranteed minimum daily payment to cover overhead costs even if a minimum number of COVID-19 tests were not performed,” Lysyk wrote in the report.

One vendor charged its guaranteed minimum daily payment of $8,255 whether zero tests or 250 tests were performed in a day, the report said.

The audit identified 105 instances, representing $800,000, in which vendors got their guaranteed minimum daily payment despite testing no one that day.

Auto insurance premiums up since 2017

Ontario has the highest private passenger auto insurance premiums in Canada, despite having one of the lowest rates of car crash injuries.

Lysyk said, for example, Ontario could follow British Columbia and Saskatchewan’s lead and implement a mandatory certification regime for vehicle repair businesses to protect against fraud.

A government-commissioned report in 2017 called Ontario’s auto insurance system “one of the least effective insurance systems in Canada,” and recommended several changes, including adopting a “care not cash” approach, exploring better ways to care for people who are catastrophically injured, and making lawyers’ contingency fees more transparent.

Little action has been taken so far on the report’s recommendations, Lysyk wrote.

The former Liberal government commissioned the 2017 report at a time when it was under fire for promising, but failing, to significantly decrease auto insurance rates. The Liberals had promised in 2013 to lower rates by an average of 15 per cent by 2015, but then-premier Kathleen Wynne later admitted it was a “stretch goal.”

By the first quarter of 2018, not long before the Liberals were roundly defeated in the election by the Progressive Conservatives, the average rate decrease was about 3.3 per cent since 2013.

Lysyk also found that auto insurance rates vary so widely in the province that the exact same person driving the same car would pay $1,200 a year in London, Ont., but $3,350 per year in Brampton.

The government directed the Financial Services Regulatory Authority of Ontario to start reviewing that framework earlier this year.