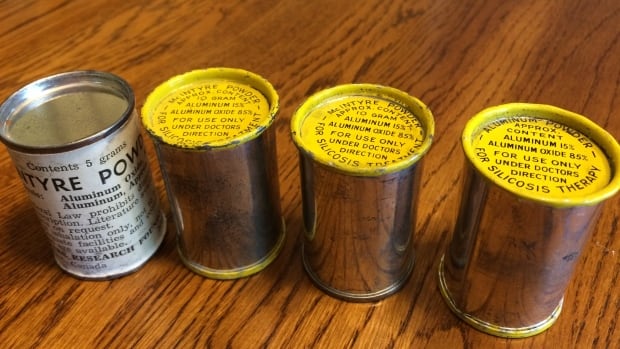 Ontario Labour Minister Monte McNaughton gave a long-awaited apology Wednesday afternoon to mine workers who were exposed to McIntyre Powder for over three decades and their families.

From 1943 to 1979, miners in northern Ontario were forced to breathe in the black ground aluminum dust before they started their shifts.

Their employers told them the powder would protect them from the lung disease silicosis, but many of them developed neurological disorders and lung issues years later.

In 2020, the Workplace Safety and Insurance Board of Ontario (WSIB) confirmed miners forced to inhale McIntyre Powder were at a higher risk of developing Parkinson’s disease.

‘Tragedy should not have happened’

“While we know an apology will not bring your loved ones back, it will not ease the pain and sadness so many of you have faced. This tragedy should not have happened to you,” McNaughton said in the Legislature, with a group of about 30 people, including former miners exposed to McIntyre Powder and their families, in attendance.

“It should not have happened to your loved ones. And to each and every one of you, on behalf of the people of Ontario, we are truly sorry.”

Sudbury MP Jamie West, who has advocated for individuals affected by McIntyre Powder and their families, said, “We are here to tell you we are sorry.”

West said this would be an important day in Ontario mining history.

Janice Martell started the McIntyre Powder Project to prove there was a potential link between inhaling the powder and neurological disease. Her father, Jim Hobbs, inhaled the powder while working as a miner and died in 2017 of Parkinson’s.

Martell has collected the health records of more than 27,000 former miners for the McIntyre Powder Project registry.

Before the apology, former miners who inhaled the powder while on the job, along with their families and supporters, gathered at the United Steelworkers Hall in Sudbury to board a bus headed to Toronto so they could attend in person.

Peter Gary Zarichney was one of them.

He remembered his time working underground in Elliot Lake in the early 1970s for Rio Algom, and how the air would be blackened with McIntyre Powder.

“We would come in at the beginning of the shift, and we would go take our street clothes off and then we would come back into the dry [room] where our clothes would be hanging,” he told CBC News.

“And as soon as we got in there, they would set the McIntyre dust canisters off and you couldn’t see in the room other than about a couple feet.”

Zarichney said he and his friends would try to sneak off before they dusted the room with McIntyre Powder, but they were always caught.

He said he now has early dementia and lung problems. His father also worked in the mines for more than 30 years.

“He had a black lung, and he had dementia, and plus he had cancer,” Zarichney said.

His daughter, Rosemarie Zarichney, said she remembered one day, when she was a child, her father told her mom she couldn’t wash his work clothes at home anymore.

“So I knew there was something not OK about that,” she said.

“Why would my dad all of a sudden not want his clothes, his mining clothes, in the house with us or in the laundry with ours?”

Rosemarie said she only understood much later why her father took that stance.

“They were told to do things that weren’t OK and it was so that they could support us,” she said.

Ken Brezenski was exposed to McIntyre Powder for two years while working underground as an apprentice in the early 1970s.

“You couldn’t take your clothes home to wash them,” he said. “Like you wore your clothes until they literally fell off your body.”

Brezenski said he now has several health issues, including some damage to his lungs and brain. His father worked as a miner for 27 years, and Brezenski said his life was cut short because of exposure to McIntyre Powder on the job.

Chantal Bryce was at the Legislature for her father, David St. Georges, who died of chronic obstructive pulmonary disease (COPD) six months ago.

In addition to his lung problems, Bryce said her father also had cancer of the bladder and kidney.

She called him a “gentle giant” who would have made his way to Queen’s Park on Wednesday had he lived long enough.

Bryce said her father was in palliative care in April, when Nickel Belt MPP France Gélinas pushed the province for an official apology for McIntyre Powder survivors and their families.

At the time, House leader Paul Calandra said the government would need more time to make a proper apology.

“The families do deserve an apology, absolutely,” he said. “But we can’t do it in less than 24 hours.”

Bryce said her father felt some relief that things were moving forward, but was also disappointed an apology didn’t happen in April.