Her son’s heart surgery has been cancelled twice. It’s happening all over Canada 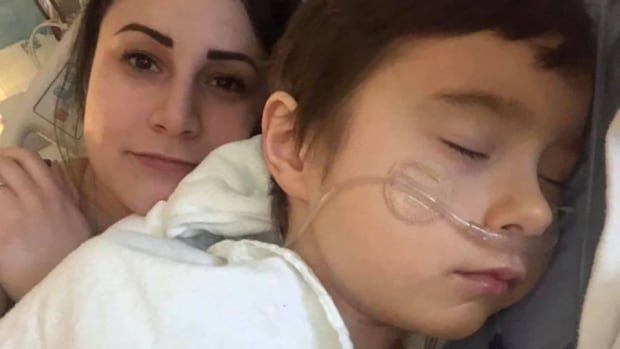 The Current43:48Children’s hospitals forced to cancel surgeries amid ‘tripledemic’ surge of respiratory viruses

When her nine-year-old son’s heart surgery was recently cancelled for the second time in as many months, Rachel Armstrong was left angry, frustrated and “visibly shaking.”

“My reaction was not very good … my stress was through the roof,” said Armstrong from Kamloops, B.C. Her son Jackson Anderson has been waiting for surgery at B.C. Children’s Hospital since May.

“As a parent, it’s scary to think that your child’s medical care might be getting pushed back and pushed back,” she told The Current’s Matt Galloway.

Jackson was born with holes in his heart, a condition for which he has already had 10 surgeries. Last spring, doctors said he would need to have his aorta replaced with a mechanical valve, but that surgery was postponed in both October and November because there was not adequate staffing to oversee his recovery in ICU.

The delays extend the anxiety that Armstrong has felt since the day she learned he would need surgery.

“Until he’s in that [operating room] and has come out, you kind of have that thought in the back of your mind … what’s going to happen to him in there? Is he going to come out OK?” she said.

Delays to pediatric surgeries are being reported across the country, as hospital staff are redeployed to tackle a so-called tripledemic surge of flu, COVID-19 and respiratory syncytial virus (RSV). Beds in ICUs are also needed for the children sickest with these viruses.

Jackson’s condition is stable, but an obstruction in his aorta is expected to only get worse until the surgery happens. Armstrong thinks there’s a good chance their next appointment, in December, might also be cancelled. But she understands that hospitals are under a lot of pressure to care for acute cases.

“There are children out there that need that space, need that care. So we just need to accept that and know that they probably need it a little bit more than we do,” she said.

The Current contacted the B.C. Children’s Hospital for comment, but did not hear back.

Last week the Vancouver hospital activated emergency overflow measures to manage a higher-than-usual volume of patients. In Calgary, Alberta Children’s Hospital announced plans Tuesday to redeploy staff and postpone a number of surgeries. Some surgeries at the IWK Health Centre in Nova Scotia have been cancelled, and health officials have urged people to keep vaccinations up to date, stay home when sick, and wear masks to combat a spike in respiratory illnesses among young children in that province.

At Toronto’s Hospital for Sick Children, Dr. Steven Schwartz says they’re seeing a similar spike, with some of the sickest children struggling to breathe by the time they come to hospital.

“I have never seen anything like this in terms of just the vast numbers of patients. And it’s not just here. It’s across the province. It’s across the country. It’s across North America,” said Schwartz, chief of the department of critical care medicine at the hospital, known as SickKids.

“We were always a system that had vulnerabilities. This has unmasked every vulnerability that we’ve always had.”

SickKids is Canada’s largest pediatric hospital. Its emergency department was designed to see 65,000 patients a year, but the current surge puts this year’s number on track to reach 90,000, according to hospital figures.

Data seen by CBC News shows a 21 per cent increase in visits between Oct. 3 and Nov. 7, compared to three years ago. The average wait time in the emergency department was three times longer than in October 2019, with some patients waiting up to 12 hours.

CBC News is granted rare access inside Toronto’s Hospital for Sick Children as staff try to keep up with a spike in seriously ill children sick with respiratory illnesses.

In order to redeploy nursing staff, Schwartz said they took the “very difficult decision” to cut 40 per cent of surgeries, prioritizing urgent operations. Of SickKids’ 16 operating rooms, six are currently out of use.

He’s keenly aware that being able to help children sick with respiratory viruses comes at the cost of other kids, who aren’t getting the surgeries they need.

“They’re necessary operations — things that kids need — but if they don’t get them today, they won’t die,” he said.

“Whereas if the kids that we’re talking about [with breathing difficulties] don’t get the care today, they will die. And that’s the stark reality of it.”

SickKids’ pediatric intensive care unit (PICU) takes in children from its own ER, but also from other hospitals and points of care. When the call comes that a very sick child needs a PICU bed, Schwartz said it’s a scramble, because “a bed isn’t just a bed — a bed is also a nurse.”

Making that happen falls to people like Lori Hamilton, a charge nurse at the critical care unit, who said she’s had to get more creative when the PICU needs to find an extra bed.

“Like, if we had two lesser-acute patients in two different areas of the unit, is there a way to put them together to have one nurse safely take care of those two patients?” she said.

Hamilton will also sometimes ask for nurses to be sent from other parts of the hospital, or ask staff members such as respiratory therapists to pick up extra duties involving patient care.

“We are asking nurses to do more than they ever have before and providing them with different resources in order to be able to do that safely,” she said.

She said teamwork is helping to get the job done, but stress levels have been high.

Staff have faced frustration from worried parents stuck with long wait times, and security guards have been deployed in waiting and triage areas to help when emotions boil over.

A rise in respiratory viruses is expected to continue to drive up an unprecedented number of patients seeking emergency care at Winnipeg’s Children’s Hospital — but if people take precautions, upcoming holiday gatherings may not push it over the edge, an official says.

Hamilton worries that “we may hit a point where we don’t have enough staff to do this,” and patients from the local area will be sent to hospitals much further away, even out of province.

Alex Munter, president and CEO of CHEO, a pediatric hospital in eastern Ontario, said his hospital is also cancelling surgeries to deal with increased numbers of patients. He hopes the current crisis could lead to more resources for children’s hospitals, from both federal and provincial bodies.

“My hope is that the silver lining for all of this is that we finally have eyes on the fact that we have a growing children’s population in this country,” he said.

“Let’s get ahead of this now. Let’s, in a thoughtful way, make the investments that we need to make to make sure that kids get the care they need when they need it.”

There are more than 6,000 children on a surgery waitlist at SickKids, and delaying those procedures could pose fresh problems, said Dr. Simon Kelley, associate chief of perioperative services.

Some conditions get worse over time, he explained, meaning that children may need more complicated surgeries, with increased risks, by the time their turn comes. Pediatric surgeries are also timed carefully around specific developmental milestones, he added.

Given that the flu season can sometimes extend through February, Kelley worries that the reduced capacity could affect surgeries into springtime. Even when staff can be deployed back to the surgical unit, he thinks it will be difficult to get through the increased backlog.

“Those children that don’t have urgent surgeries, they will languish on our waitlist. And there are thousands of those children who are waiting longer and longer,” he said.