Caribou summit asks a burning question: What’s the future of the Porcupine herd? 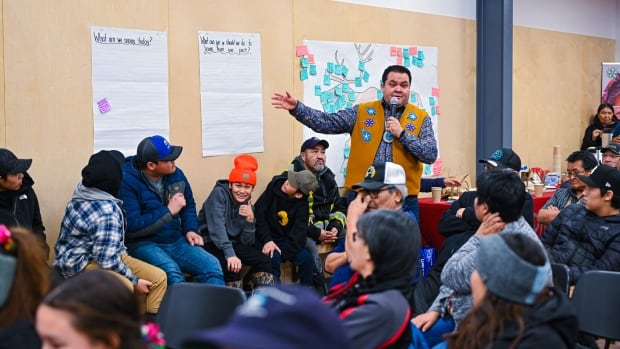 The Porcupine caribou is one of the few barren-ground herds in the circumpolar world that remains strong and healthy — and the communities who rely on it want to make sure it stays that way.

This was the key takeaway from a three-day Caribou Summit held in Fort McPherson, N.W.T., last week. Organized by the Gwich’in Tribal council, it was the first event of its kind for the region.

“These types of gatherings … bring out the best in our people,” said Ken Kyikavichik, grand chief of the Gwich’in Tribal Council, in an interview on the summit’s first night. “The collective power and the collective knowledge we have in this room really is astounding.”

The herd has gained international attention over the years because of ongoing debate in the U.S. over development in Alaska’s Arctic National Wildlife Refuge, where the herd’s calving grounds are.

The Porcupine caribou stand as an anomaly amid Canada’s many barren-ground caribou herds suffering major declines. Data collected in 2018 marked a historic high, with 205,000 to 235,000 animals counted.

Today, that number sits around 218,000, according to caribou biologist Mike Suitor with the Yukon Government.

“Right now, it’s actually one of the biggest herds in the world,” Suitor said.

“We collect information from a scientific perspective, but we also collect a lot of information working with harvesters and talking to people in the community, and a lot of indications are still fairly positive.

Herd is healthy and numbers are strong – for now

It’s difficult to pinpoint exactly why the Porcupine caribou herd is doing so well at the moment, Suitor said.

It could be that the diversity of the herd’s range has allowed the animals to better adapt to the changing climate, or that there’s fewer human-made obstacles (save for the Dempster Highway) impacting their migration.

But Suitor warned that a dip in numbers is inevitable.

“It’s normal for some herds — they go up, they go down,” he said. “If I was a betting person, I would say that there’s a reasonable chance it will decline in the near future. Is that two years? Five years? Ten years? It’s hard to say.”

“We don’t want to wait until we are in a crisis situation, per se,” he said. “We realize how fortunate we are that we have a healthy herd. So, it’s really important for us to gather and ensure that we do what we can so the caribou remain strong in terms of numbers.

“The vitality of the herd is our primary concern, so that our future generations do have access to vadzaih (caribou).”

People from across the western Arctic traveled to Fort McPherson to share their thoughts and at the summit. Open sessions explored the past, present, and future of the herd.

The use of ATVs and snowmobiles for hunting was top of mind for many in the crowd, with some expressing concern over the vehicles’ impact on the landscape and animals.

“We have to talk about chasing caribou with Ski-doos,” said local elder Robert Alexie. “Those poor caribou … they don’t get a chance to eat. That’s cruelty. It’s really bad.”

“I really am against stuff like that,” she told CBC. “When we teach our kids and our grandkids to hunt, we teach them that walking is the best way to respect the land and to respect the animal. Because if you’re using a four wheeler, you’re chasing it, and it’s getting scared.

“Think about the way it’s making their spirit feel.”

Meat wastage was another popular topic of discussion. A number of community members recounted experiences of finding caribou carcasses and heads left along the Dempster Highway.

Joe Tetlichi, chair of the Porcupine Caribou Management Board, said the organization has been aware of problems with improper hunting practices for some time now, but lacks the power to stop it.

As such, Tetlichi said the responsibility of change lies with communities and harvesters themselves.

“I really feel that it’s everybody’s individual responsibility when they go out there to do best practices,” he said.

“It’s the common sense approach. You go in there, and you do what you need to do for the long term sustainability of the Porcupine caribou — if that’s harvesting off the road, cleaning up your kill site, [or] passing those teachings on to young people.

Despite several calls for formal resolutions and bylaws to address these issues, none were passed at the summit’s end. Leaders within the Gwich’in Nation are expected to convene again in the coming weeks and determine concrete action items based on what was shared.

Kyikavichik confirmed that a ban on the use of ATVs for hunting, stricter protocols for harvesting seasons, and the creation of a land guardian program are being considered.

Perhaps the strongest message shared at last week’s gathering was a need to reconnect with traditional Gwich’in values.

Many attendees spoke about past practices, such as taking only what was needed and sharing with those unable to harvest for themselves, and advocated for a return to these teachings.

A key part of this is listening to the advice of Elders and knowledge-keepers, Netro said.

But as more pass away, that’s become harder to do.

“People say we need to start listening to our older people, but where [are] the teachings being taught?” Francis asked. “Why aren’t the traditional teachings of caribou and the stories behind it being taught in school?”

She added: “We listen to our parents the most, and if our parents aren’t practicing these [teachings], then the younger generation isn’t going to be practicing it either.”

In part, the summit sought to aid in that intergenerational transfer of knowledge. Daily demonstrations around skinning caribou and preparing meat were held each afternoon, with local youth invited to participate and learn under the gentle guidance of elders.

For former Teetl’it Gwich’in chief Wanda Pascal, it was heart-warming to witness, and an important start.

She even suggested a separate summit specifically for youth out on the land — a way of preparing the next generation of stewards to fight for the Porcupine caribou.

“Taking the kids out on the land is really powerful, because that’s the only way they’re going to learn,” Pascal said. “Education is really important.”