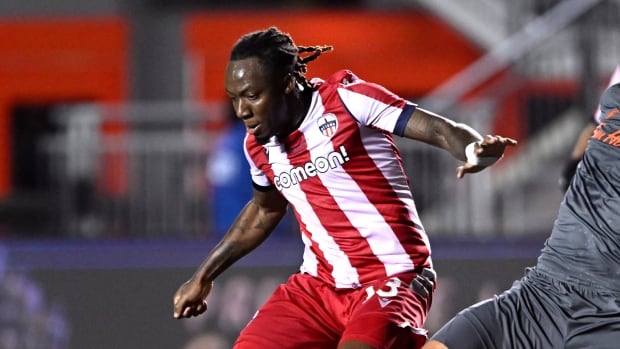 The 23-year-old winger, formerly of CF Montreal and FC Barcelona B, appeared in all but one of Ottawa’s games in 2022. He had seven goals and five assists.

“Ballou’s time in Ottawa proves that we can bring in top-quality players and help them develop, giving them a platform to move on to strong leagues around the world,” Atletico Ottawa CEO Fernando Lopez said in a statement. “This is what aim to continue doing as we work to build a stronger and even more competitive side ahead of the 2023 season.”

“My time in Ottawa has been fantastic,” said Tabla. “I have found a lot of things I’d lost, first of all my smile and then my joy on the field.

“I met some wonderful people, incredible staff and passionate fans. Every single day was full of positives, what an experience. Unfortunately, I have to leave in this way, without a chance to give the fans a real goodbye, but that’s soccer. This experience with Atletico Ottawa has brought me back to such a good place in football and I am so happy and grateful.”

Tabla, who came to Canada from the Ivory Coast when he was eight, has won two caps for Canada at the senior level.

Tabla joined the Montreal academy in August 2012 and graduated to the MLS first team in October 2016.

At 17 years 338 days, he was the youngest Montreal player to take part in an MLS game when he saw action in San Jose in March 2017. He went on to play 32 regular-season games for Montreal with three goals and two assists.

Tabla made the move to Barcelona’s B team in January 2018. He returned in August 2019 on loan in a move that was eventually made permanent. He signed a two-year deal, with two option years, in January 2020.

Montreal opted not to exercise his contract option in November 2021.