2 funding pledges and a soup-to-go: Liberals make the rounds in Hamilton before cabinet retreat 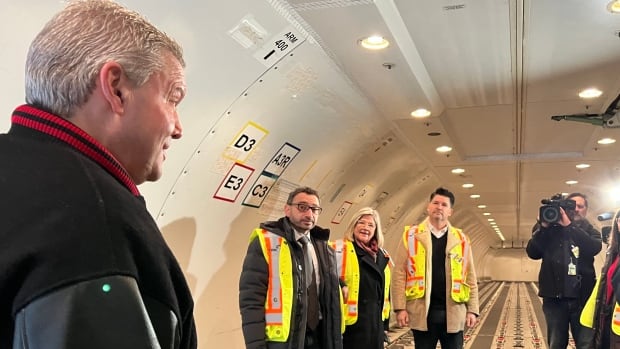 With Liberal cabinet ministers in Hamilton on Monday, some took the opportunity to make a splash in the city with funding announcements before formal meetings got underway.

Monday morning at the Hamilton airport, Minister of Transport Omar Alghabra announced the airport would be receiving a $23.5-million investment to rehabilitate airport infrastructure and help expand cargo operations.

Then, around midday downtown, Minister of Justice David Lametti announced a $600,000 fund, over four years, for the John Howard Society of Hamilton, Burlington and Area, which supports people impacted by the criminal justice system.

Other members of the Liberal government were also seen around the city. Notably, Prime Minister Justin Trudeau and local MP Filomena Tassi grabbed lunch to go — broccoli cheddar soup and a cheeseburger — from the Burnt Tongue restaurant on Locke Street Monday afternoon.

Trudeau and Liberal cabinet members are in Hamilton for a three-day retreat expected to discuss affordability and the healthcare system, among other issues.

“This cabinet retreat will be an important opportunity to build on our continued efforts to make life more affordable for the middle class and people working hard to join it, as well as seize new opportunities for Canadian workers and businesses,” the prime minister’s office said in advance of the meetings, which began Monday evening.

“In this instance, the ability of the Liberals to continue to govern relies on their ability to hold onto their seats in the GTA, especially those in the ‘905’ ring around the city,” said Graefe.

The $23.5-million investment will go toward the $47-million project, which will allow the airport to improve and expand airfield capacity, increase de-icing capacity and “build a new independent road to reduce congestion.”

“This investment will have significant economic and employment benefits for the region, such as reducing supply chain congestion, facilitating the movement of goods and creating good jobs for Canadians in the region,” said a release about the project.

“Today’s investment undoubtedly strengthens our airport air cargo capacity, it solidifies why major brands … have chosen to get the best here, which means more good paying jobs in our community,” said Horwath.

Cathie Puckering, vice-president of the Canadian Network at Vantage Airport Group — which oversees the Hamilton airport —  said the project will generate 460 construction jobs and over 1,800 full-time jobs by 2025.

Down the Mountain on Barton Street East, Minister of Justice David Lametti announced support for the John Howard Society of Hamilton, Burlington and Area, from the justice ministry’s Youth Justice Fund.

The funds will go toward the organization’s Fetal Alcohol Spectrum Disorder (FASD) Youth Justice Program which aims to “support youth engaged in the justice system who have been diagnosed with, or are believed to be affected by, FASD.”

“The funding provided for this project has allowed us to focus on a few key areas,” said Kim Gibson-Chalmers, manager of youth services with the organization.

“The first was to help between 25 and 30 youth and their caregivers to navigate the youth justice system and develop strategies to prevent further involvement in this system,” said Gibson-Chalmers.

The funding will also be put toward work with caregivers and families to build support systems, provide alternatives to custody programming and strengthen relationships between “agencies and service providers working with youth impacted by FASD” in the area, she said.

When asked if Lametti would also be discussing possible changes to the bail system with his colleagues in Hamilton, Lametti said, “I think we’ve been clear on our intention to work in good faith with the provinces” but that he couldn’t say “what we will or won’t discuss” during the retreat.

Earlier this month, 13 premiers wrote a letter urging changes to the system that would make bail harder for those accused of a charge related to the offence of possession of a loaded prohibited or restricted firearm. They also called for a review of other firearms-related offences.

In response, a spokesperson for Lametti said his office was taking time to analyze the proposal from the premiers. David Taylor, Lametti’s director of communications, noted that work on examining Canada’s bail system was ongoing, after an agreement to review the system was made at a federal-provincial meeting in November.

The cabinet retreat runs until Jan. 25.