Beyond them is a long gleaming marble-floored corridor adorned by flower bouquets, glistening Murano chandeliers and display cases filled with perfumes.

The hotel – interiors designed by Fiona Thompson – blends elements of Art Deco with contemporary furnishings and Ancien Regime-style grandeur such as grand columns and gold leaf. 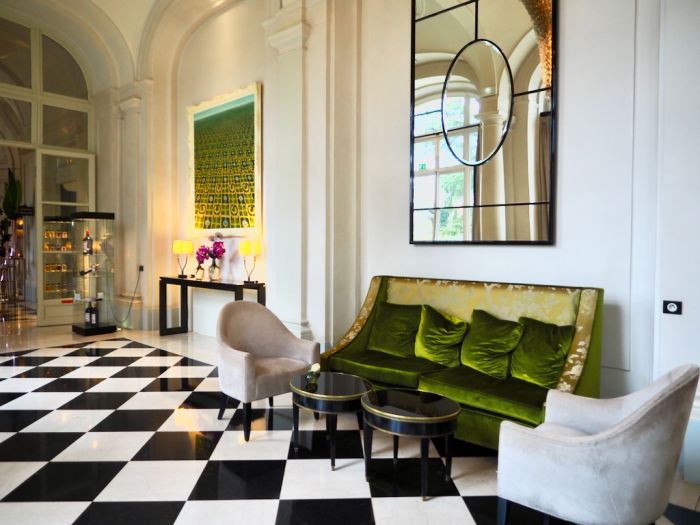 For those wishing to enjoy the uplifting ambience created by natural light flooding through floor-to-ceiling windows, armchairs stretch the entire length of the corridor.

The reception and concierge desks are located discreetly out of sight granting an uninterrupted view along the corridor to the Clemenceau Room where six months of peace negotiations took place to end the First World War with the Treaty of Versailles. 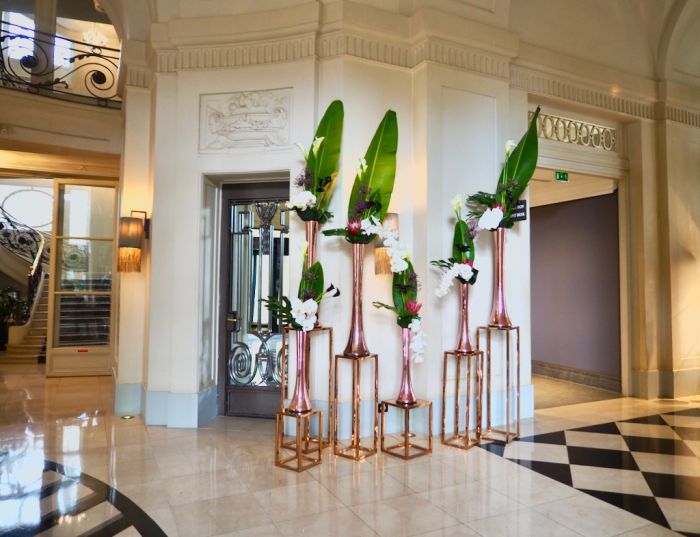 The hotel, owned by French businessman, Michel Ohayon, takes its name from the sumptuous pleasure palace of Louis XIV 15-minute walk away and is set in several acres of grassy land beside the estate of ill-fated Queen Marie Antoinette where farm animals were kept. A second hotel, the 4-star, 100-room Pavilion built in the 1980s, stands in the same grounds as the Waldorf Astoria.

The Hilton chain took over the hotel in 2010 and transformed it into a Waldorf after some modifications and renovations, including having famed British chef Gordon Ramsay oversee the food offering. 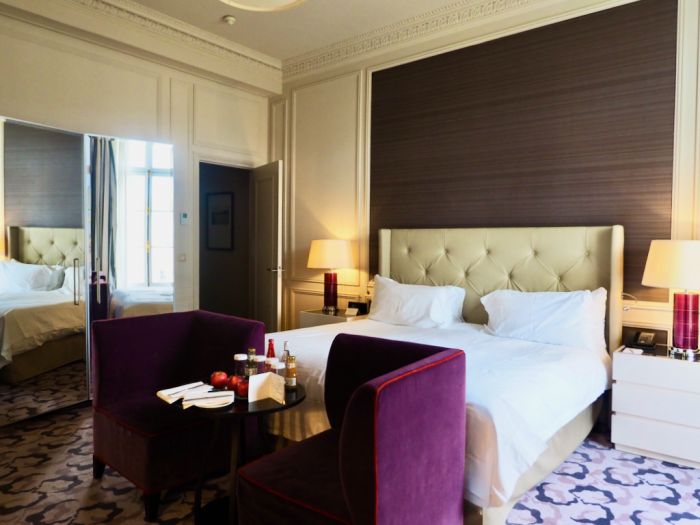 Our room, 122, reflected classic French style with stucco ceiling, striped cotton drapes, beige carpeting and open marble fireplace. Furnishings included a writing desk, twin armchairs and a coffee table. We enjoyed views from a stone balcony overlooking the grounds with birch and pine trees full of birdsong in the mornings, and the Pavilion directly in front. 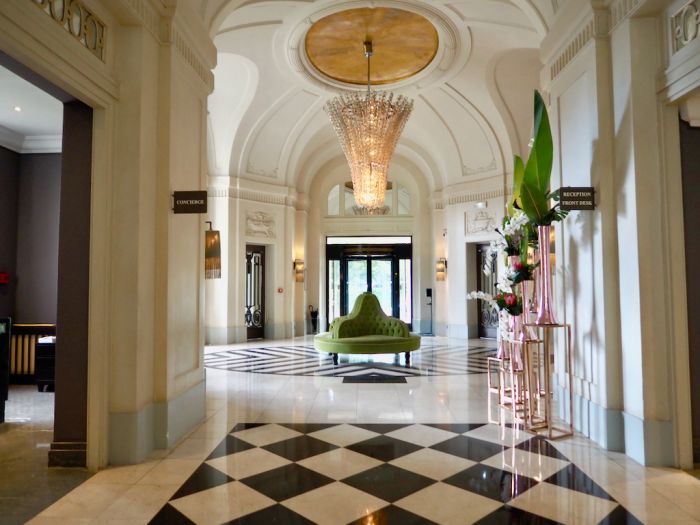 One of the hotel’s key highlights is its glass-roofed, three-story spa. Stretching over 3,000 square meters, this Guerlain-branded facility features treatment rooms, sauna, steam room, fitness center and two tennis courts. Children have access to the swimming pool until 7pm.

Clemenceau Hall at the end of the main corridor is an attractive venue for events, with four immense low-hanging chandeliers and a gold-leaf stucco ceiling. It can seat around 150 people for dinner, and has its own terrace. A wall plaque refers to the peace talks here in 1919 before the treaty was signed in the Hall of Mirrors in the Palace of Versailles. 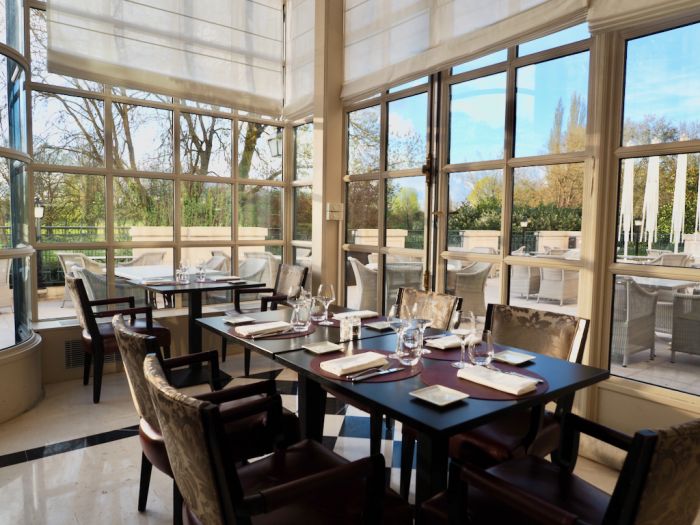 The hotel is pet friendly, one dog per room, and hosts a ‘Kid’s Club’ with various activities to keep young ones happy.

Guests enjoy two dining choices at the Waldorf, the one-star Michelin Au Trianon restaurant and Bistro Le Veranda, close to each other on the ground floor. 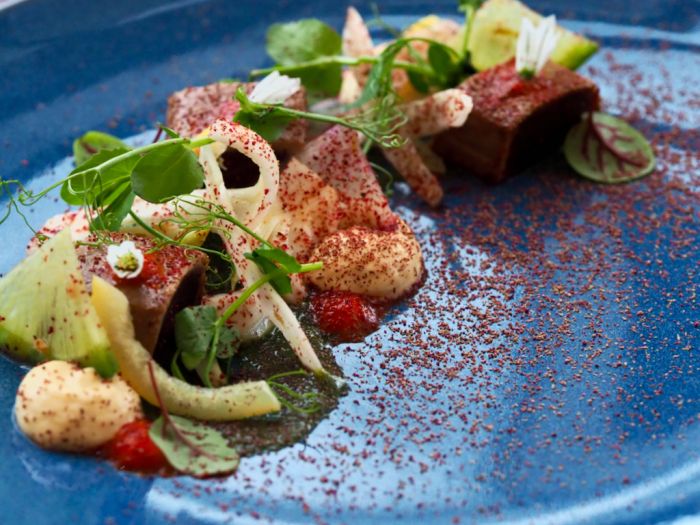 We spent an enjoyable evening in the bistro beginning with a glass of Pineau des Charentes, a regional aperitif of western France, and a dry martini. Chef Frederic Larquemin served us up starters of foie gras confit with chutney and a green pea soup followed by mains of tuna tariki and ossobuco accompanied by saffron fregula. To complement our dinner, a crisp Domaine Regis Minet Pouilly-Fume Vieilles Vignes and a Château Trianon Saint-Émilion Grand Cru 2014 were uncorked and amply sampled. 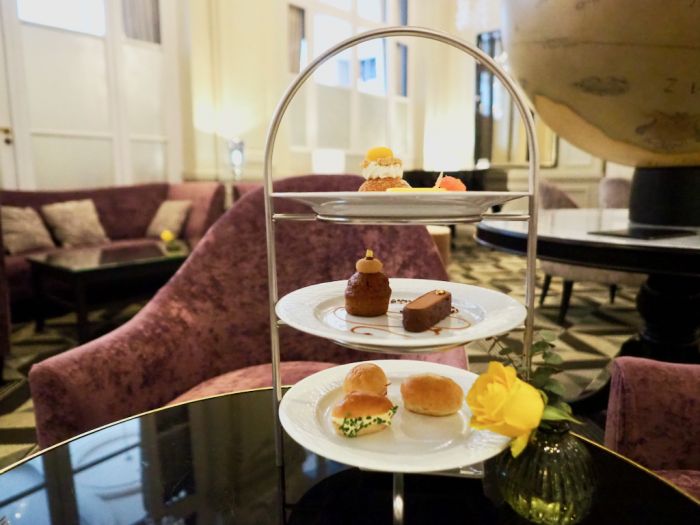 Next day we sat on plush purple armchairs beside a giant globe perched on a table in Bar Galerie just off the central corridor for a relaxing traditional afternoon tea. Ambience is elegant here with a high stucco ceiling, chandeliers, black and white patchwork carpeting, a piano in one corner and a giant mirror above an open grey-veined marble fireplace. Silver jewelry encased in glass adorn one wall. 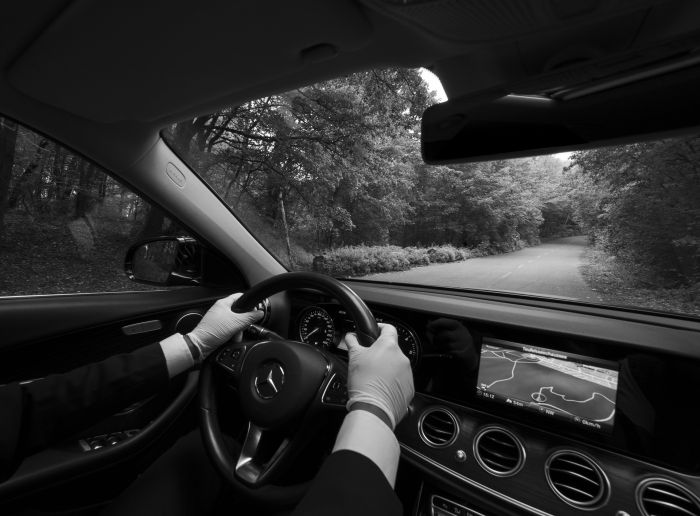 Staying at such an historic property means arriving in style and we certainly did that, using Blacklane, founded by Frank Steuer and Jens Wohltorf. A reliable carbon-neutral, chauffeur service spanning 50 plus countries, its rates are all-inclusive, meaning no extra payment taxes, tolls or fees of any kind. And all their chauffeurs are English-speaking.

With the famous palace and estate, now designated a World Heritage Site by UNESCO, being so near, the Waldorf is a convenient hotel to spend a relaxing day or two outside Paris.

Unwind at The Westin Riverfront

Fearing another wave of COVID-19, feds urge people to get a booster dose