HomeTravelFour Seasons Hotel Firenze is a Destination Unto Itself
Travel

Four Seasons Hotel Firenze is a Destination Unto Itself

The Duomo. Palazzo Vecchio. The Uffizi Gallery. Florence’s list of most desired destinations also includes a slightly less obvious but equally impressive locale – the Renaissance-era Four Seasons Hotel Firenze. Every bit as historic and extraordinary as its host city’s marquee attractions, this gorgeous former 16th century convent and 15th century palace features everything for which visitors to The City of Lilies pilgrimage – art, history, architecture, culture, and cuisine. It’s all here in one stunning package. 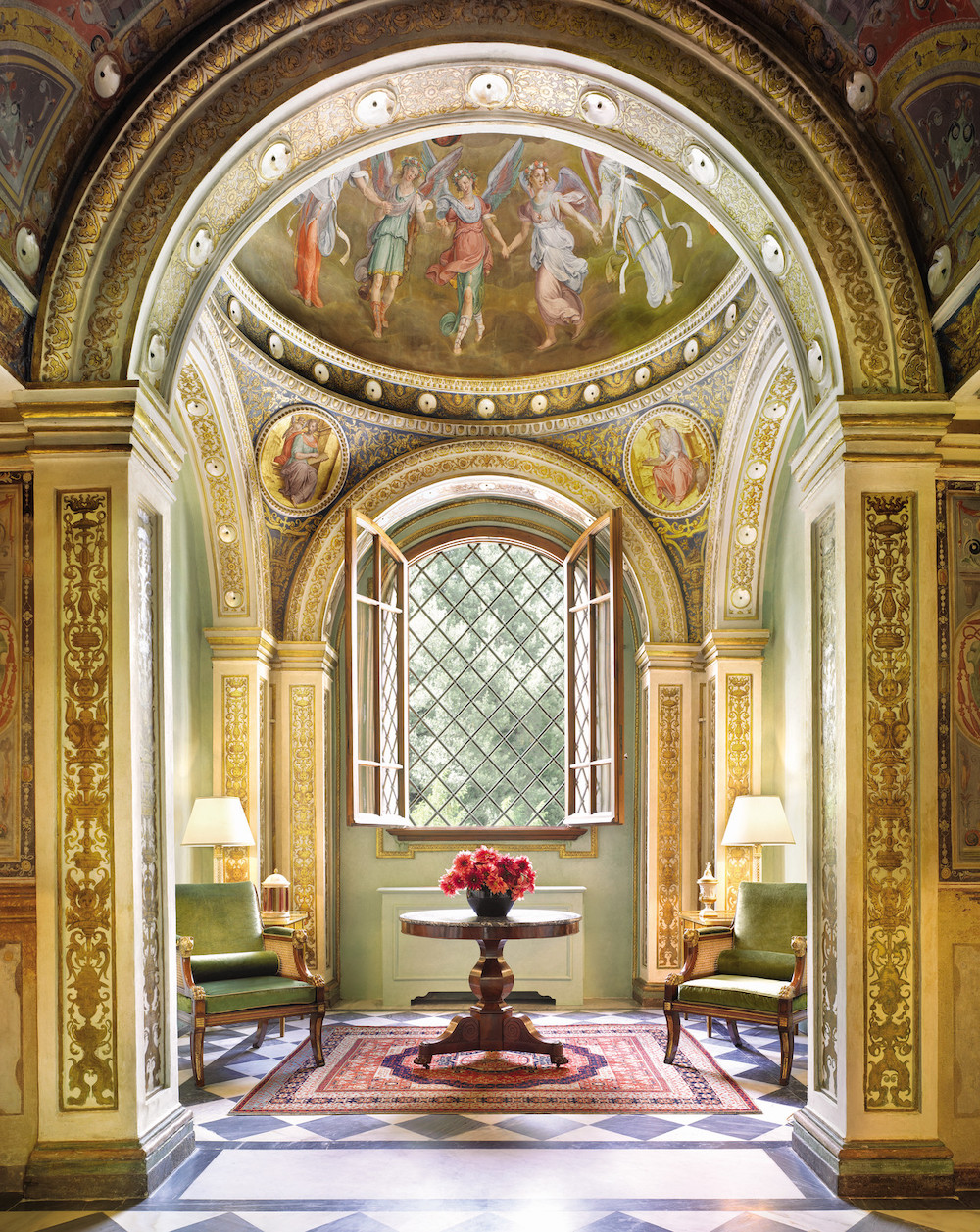 If lodging elsewhere in the city, you’ll want to add Four Seasons Hotel Firenze to your itinerary in order to explore the 11-acre Giardino della Gherardesca that adjoins the hotel’s two buildings in which its 116 rooms and suites are located. Reserve a table in the sumptuous, Art Nouveau-era Atrium Bar to enjoy a custom Negroni served from the iconic drinks trolley, and afterwards, stroll on winding paths throughout the lush grounds peppered with whimsical statuary and sparkling fountains. You’ll spot the dome of the majestic Duomo, with the realization that this urban sanctuary is close to the action, yet sublimely situated just beyond reach of the madding crowd. This is the largest private garden in the city of Florence, and it’s spectacular. 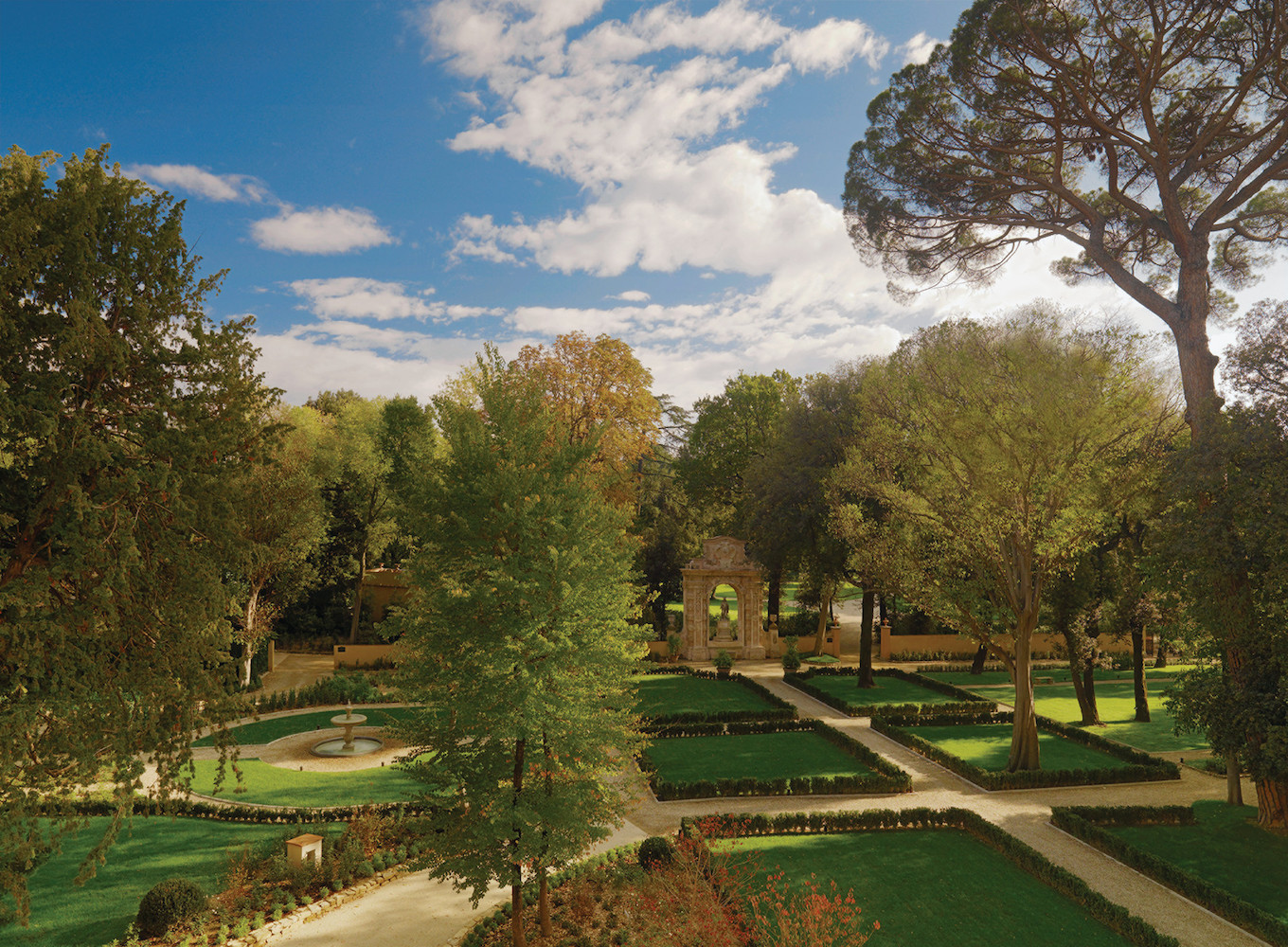 If staying on property, lucky you. In addition to exploration of the gardens, you’ll enjoy the newly renovated swimming pool and hot tub, the state-of-the-art fitness center, and the charming and bespoke service that is a hallmark of the Four Seasons brand. You’ll have time to indulge your intrigue in the bas-relief, mythological story depictions that line the walls of the light filled lobby, around which several luxury boutiques are situated. You’ll enjoy the unhurried pleasure of an al fresco lunch overlooking the garden, where the air is scented with blossoms from the potted orange trees. You will indulge in a daily, bountiful buffet breakfast, where every culinary desire is met and exceeded. And after a day of exploration, you’ll sleep beautifully in your custom Four Seasons Bed, after enjoying a relaxing soak in your marble tub. 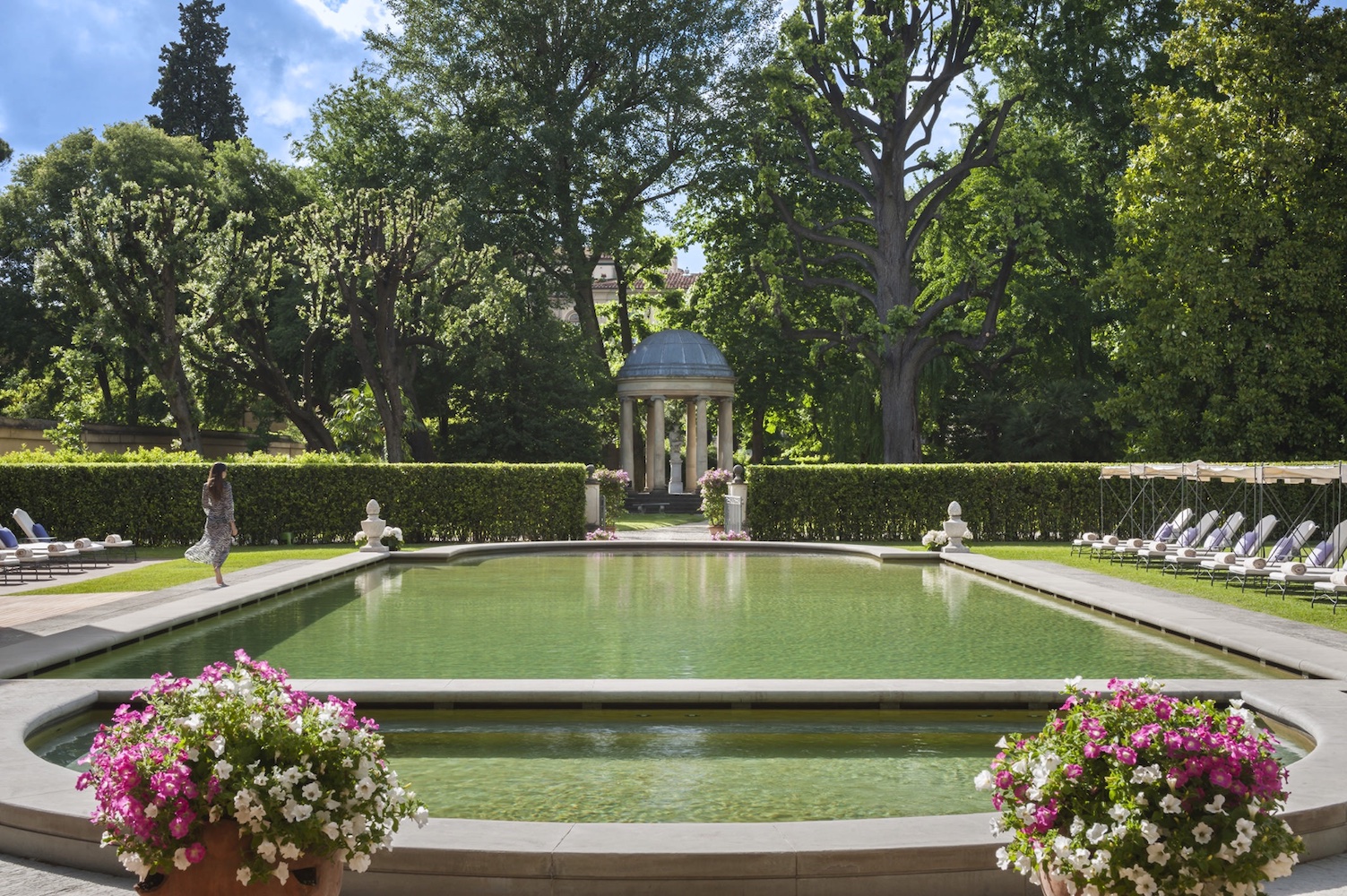 Each of Four Seasons Hotel Firenze’s 116 rooms and suites are situated in either the 15th century Palazzo della Gherardesca, site of the formal lobby and flagship Michelin-starred Il Palagio restaurant, or across the garden in the smaller and quieter Villa, a former 16th-century convent that features its own check-in and concierge, and Magnolia Bistro, a greenhouse gem of a restaurant where breakfast is served attentively and dinner service begins this summer. More than a dozen different room categories provide choice, and nearly all are entirely unique in size and design. Each features period furnishings and art, and rich textiles. Some rooms feature original palazzo elements such as frescoes, friezes, and bas-reliefs. The Renaissance-authentic Noble Suite features a frescoed vaulted ceiling in the bedroom and a breathtaking paneled and gold decorated ceiling in the separate living room. The Gallery Suite preserves individual features of the original architecture, such as paneled ceilings or frescoes in the bedroom. A white marble tub takes center stage in the ornate bathroom of the Stephenson Suite, and Chinese silk wallpaper is a highlight of The Volterrano Suite. For ultimate decadence, book the opulent Royal Suite, located in the former nobles’ quarters at the Palazzo, and enjoy painted vaulted ceilings, original Capodimonte Maioliche-style ceramic floors, 17th century frescoes, and park views from every window. 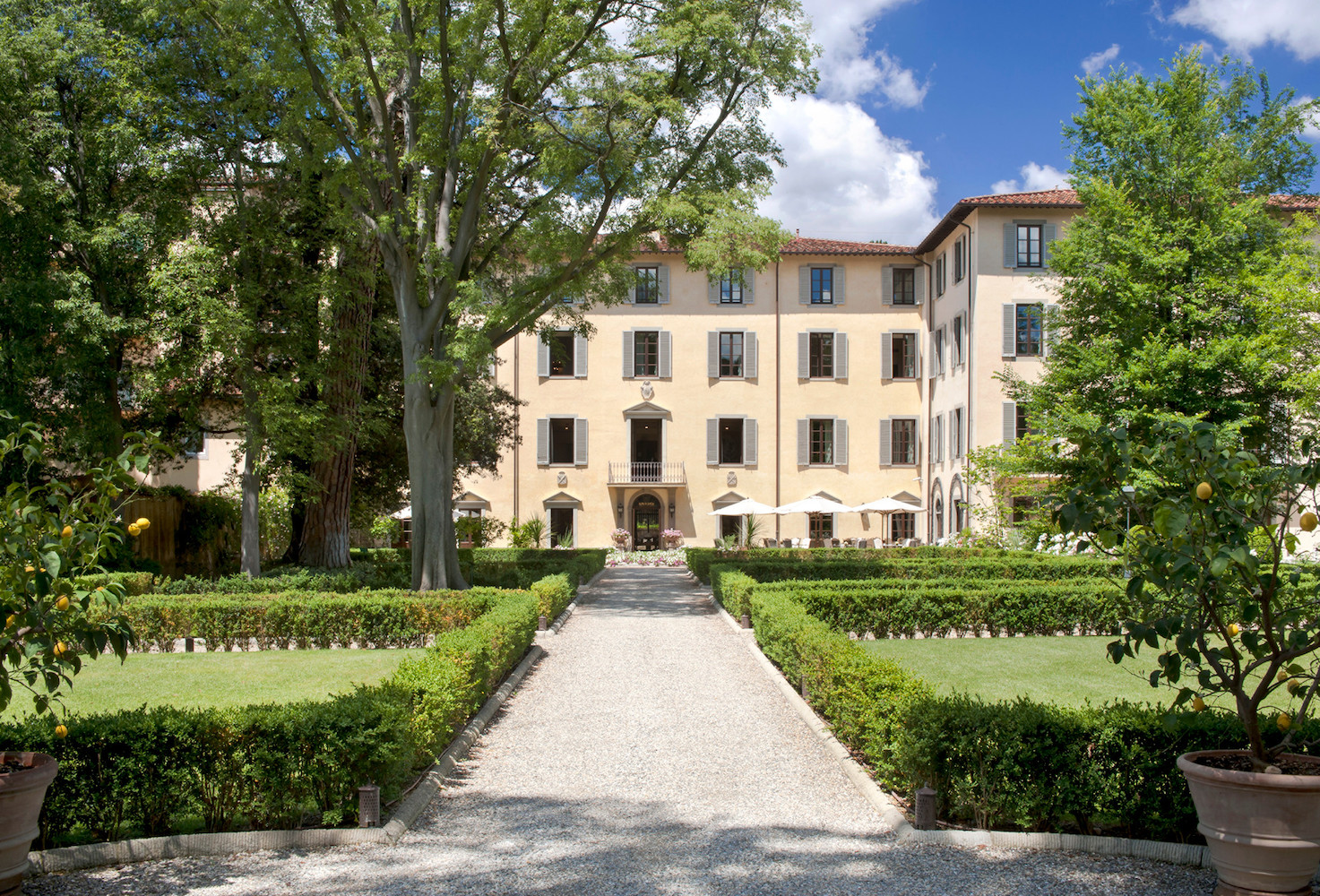 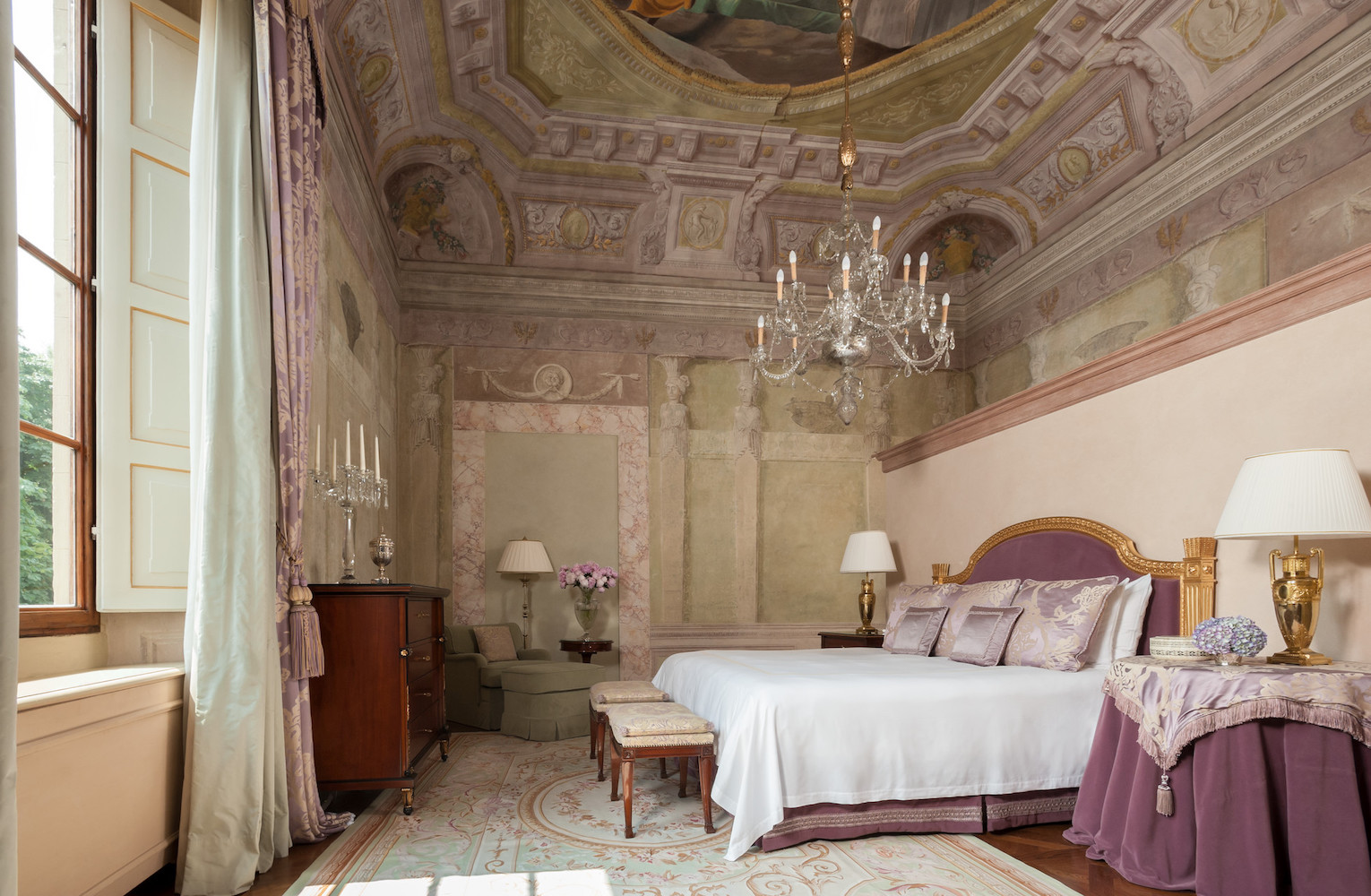 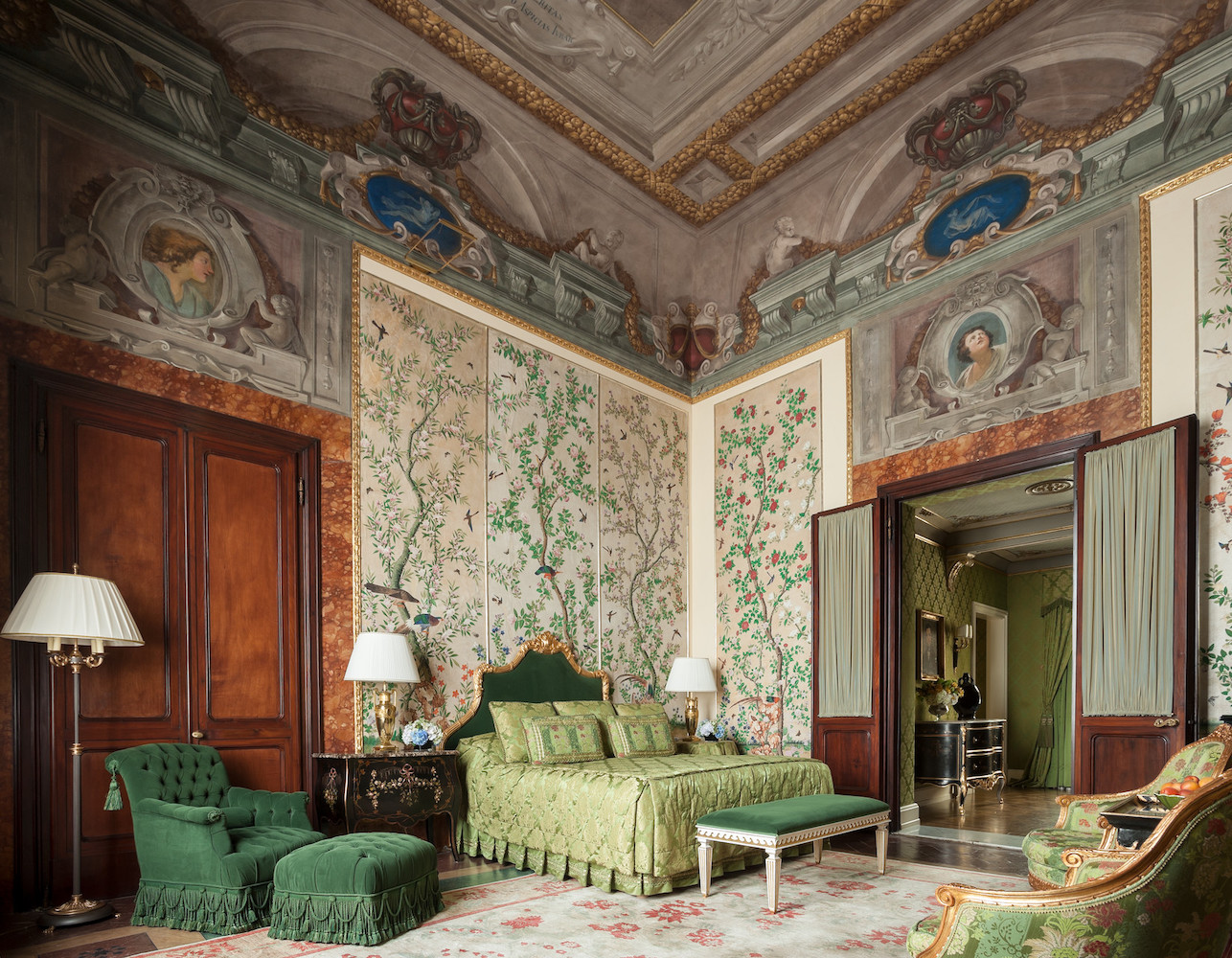 Executive Chef Paolo Lavezzini helms the kitchen at Il Palagio, where he has also refined the dining room atmosphere to make it more intimate. Lavezzini uses traditional and simple ingredients, preparing them lightly and arranging striking presentations in unique combinations that blend flavors, consistencies, and textures. His six-course Della Gherardesca tasting menu starts with an aperitivo box of snacks such as juniper tart and red beetroot in shapes inspired by the garden. Then come unexpected selections such as a dessert-like starter of marinated eggplant with pecorino, tomato and rhubarb ice cream; comforting agnolotti stuffed with guinea fowl, Parmigiano Reggiano cream, and porcini mushrooms like his grandmother used to make. Lavezzini in inspired by the hotel, which he views as something out of dream – huge, fabulous, and immeasurable. He strives to take the guest experience even further via his cuisine.

Four Seasons Hotel Firenze is the only hotel in the heart of Florence with an on-site spa. The expansive sanctuary offers a wide range of sumptuous treatments in an elegant environment, adjacent to which is both the resort-like swimming pool, and a shaded garden furnished with chaise lounges. The separate quarters of the fitness center stand ready when you’ve not hit your 10,000 steps organically while walking the city.

To fully discover Florence’s beauty, both the obvious and the obscure, ask your Four Seasons Hotel Firenze concierge for tips. The knowledgeable staff can help arrange all manner of tours for whatever your interests – including wine. (Florence is within a short distance of Chianti.) But, you’ll not be faulted if you simply decide to stay within the walls of the Four Seasons Hotel Firenze property, where the best of Florence is all within easy reach.

Regent Phu Quoc, The Newest Gem on The Pearl Island

This is How to Celebrate Summer

Fearing another wave of COVID-19, feds urge people to get a booster dose