Whiskey has been around for many centuries. While there’s little doubt that ye olde drinkers mixed their liquor with juices, honey, herbs, and spices, the idea of the cocktail as we know it is relatively new, with (debatably) the “first” American cocktail, the Sazerac, dating back to the mid-1800s.

Whiskey enthusiasts are constantly experimenting with new, exciting concoctions, adding to the rich history of this ubiquitous spirit. Here are five essential whiskey cocktails to explore, from old to new.

Like many things alcohol-related, the history of the Sazerac cocktail is a bit hazy. Legend has it that it was invented in New Orleans sometime around the year 1850 in one of the French Quarter’s saloons masked as a coffee shop. They say that the first Sazerac was served in an egg cup called acoquetier in French, and over time, the Americanized mispronunciation morphed into the word “cocktail” still used today.

The invention of the old-fashioned cocktail likely followed the Sazerac, originating in the late 1800s. Similarly, its history depends on who you ask. In the early 1800s, it was common to mix whiskey with orange liqueurs and other liqueurs. In the late 1800s, as cocktail recipes grew increasingly complicated, bar patrons would ask for something “old-fashioned,” referencing the simpler mixed drinks of the early-to-mid 1800s. Over time, the old-fashioned evolved from a concept to an iconic cocktail beloved by all. 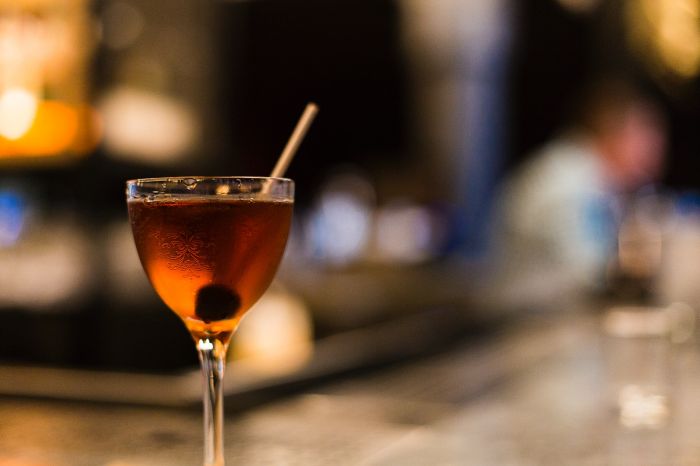 It’s believed that the Manhattan cocktail was conceived in the mid-1870s at New York City’s Manhattan Club. However, the drink really took off in post-war America, around the late 1940s and through the ‘50s. The sweet, cherry-garnished drink was especially popular among women at the time, and today it’s a nostalgic go-to among in-the-know drinkers everywhere.

The penicillin cocktail is truly a modern classic. Invented by New York City bartender Sam Ross in 2005, the penicillin made its debut at the city’s Milk & Honey cocktail bar. The name comes from the medicinal qualities of the Laphroaig Islay Scotch whisky featured in the recipe. If you don’t have any Laphroaig, substitute a different single malt Islay or a custom whiskey with similar medicinal quality.

Finally, while it may not thrill the purists, there’s no denying that the pickleback is one of the most notable whiskey drinks of the modern era. It’s made with a daring blend of Irish whiskey and pickle brine, sometimes mixed as a cocktail, but usually taken as a shot and chaser combo. While it’s not exactly the go-to choice when serving cocktails and wines at a formal gathering, the pickleback has become a sensation at five bars worldwide, earning its stripes as a modern classic. Some claim to love the taste, while others simply use it as an effective way to mask the taste of bottom-shelf whiskey.

Explore the World of Whiskey

Whiskey cocktails are ever-changing and always evolving. Some are heavily steeped in history and tradition, while others change the game completely. Take a deep dive into whiskey cocktails and you’ll discover a vast world full of possibilities. Maybe you could be the one to invent the next modern classic!

This Luxury Añejo Cristalino Is Aged in White Wine Barrels

Bentley’s Hybrid Odyssean Edition Is Both Luxe And Sustainable